Simple Budgeting Method for a Couple

Background: We sucked at budgeting for a really long time but finally after years of trial and error, we figured out a system that worked for us. I’m hoping the concept will work for you as well.   My husband and I were married very young (I was 19, he was 21). My first checking account was a joint account with him. Getting married so young we didn’t have very much money. Neither of us came from wealth so we navigated the world mostly on our own. Within six months of being married we found out we were expecting our first child. We were both still college students working as much as we could to pay our bills and actually save a little. Things changed once our precious baby girl was born though. I had to work a lot less, and our bills increased significantly. Those were the days when we spent every penny of our paychecks and sometimes had to improvise to get to the next paycheck. Our first Christmas with her was hard. We bought a 2-foot Christmas tree from the dollar store and a package of tiny decorations. We didn’t have any extra to spend on presents. Thank goodness she would have no memory of that. I can’t tell you how many checks we bounced in those years. All I know is that we were desperately trying to make ends meet, and those bank fees about killed us. By the time our second precious daughter came, we were both working in professional jobs. We were both teachers. Even though things weren’t as tight as those first few years we still managed to spend every dime we had, but only occasionally bouncing checks. Something had to change. Our biggest mistake was we always kept everything in 1 checking account that we would be try and keep a mental accounting of what we had. We may have paid all our bills and had say $500 left over, but we would forget to budget in groceries, or gas, or doctors’ appointments. Then to make it even worse, we would each think there was a certain amount in the bank and buy something without the other knowing. We would realize our mistake after the fact and have a lot less money than we originally thought. I’m embarrassed that it took so long to find a system that worked but we finally did. 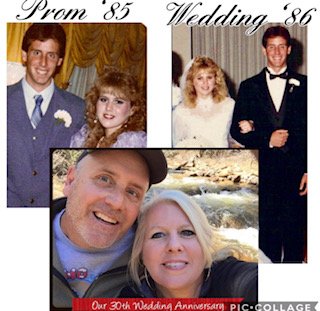 Step 1-Know your total amount of Have-to-Pay-Every-Damn-Month Expenses. If you have fluctuating bills use the highest amount it could be. Have a checking account just for these expenses. I call it our Operating Account and only have 1 person in charge of overseeing it. I would suggest the partner who is best with a spreadsheet will probably be best for monitoring this account. If your monthly expenses come to 3,546.25 a month make sure you have $3700 in there. (Always keep a little for a buffer, an oopsie, a surprise subscription fee that you thought you cancelled, etc.) It’s up to you what buffer makes sense. Also note, I include groceries and gasoline in this category too. Finally, set every bill up to draft automatically. You want this account mostly on auto-pilot.

Step 2. After leaving your buffer amount, divide the remainder into thirds and transfer it out accordingly. 1/3 Goes back to you. This for most people it means in Savings. 1/3 Goes to paying down debt. This is in addition to the monthly minimum. 1/3 Goes into, what we call our Fun Money Account. This is for guilt free spending.

More details on these decisions and why:

1/3 Savings. Open a separate account. This needs to be monitored by the "Operating Account person". The only time money comes out is if you need it to cover a surprise bill in your Operating Account or if BOTH people decide to use it for a something important.

1/3 Debt. Send an extra payment to one of your debts until you are debt free. There are several suggestions on how to accomplish becoming debt free. I’m a fan of the Snowball method that Dave Ramsey advocates. (Learn more here: https://www.daveramsey.com/blog/how-the-debt-snowball-method-works> It's my opinion that the emotional wins are what keep you motivated when it comes to paying your debt off.

1/3 Fun Money. In our early years we didn’t do this right. When you live on such a tight budget it is hard to think about fun money. When we spent money on something fun there was always guilt attached, or we overspent what we had. It wasn’t until we planned for it that it started working. I see the parallel with dieting all the time. The strict fad diets don’t work for long and then you eventually binge, followed by a waterfall of emotions that hit after you’ve “failed” and “ruined everything.” Spending can be the same way. Once we realized we needed to plan for spontaneity, we felt so much better emotionally. We felt as though we were controlling it, instead of it controlling us. What also worked for us was to open a free checking account somewhere and keep the fun money totally separate. We have only one debit card linked to it that we both share Also do not set up any automatic debits, this is strictly a “cash” account for fun.  Whichever partner who NOT monitoring the operating account should be the one who monitors the balance in this fun account. After all, you are a team and the responsibility should be shared. Often times fights over finances come when couples don’t communicate well about where the money is going. I can’t stress enough that your financial responsibilities should be shouldered by both of you even if it’s not the specific way I’m suggesting in this article. Once we opened a fun money account our life simplified. If we had money, would could pay for our fun. If we spent all of the money and there was none left, we waited until the next payday for paid entertainment. We were good at finding free stuff to entertain ourselves while we waited for our account to be replenished. It made it simple.

Eventually, we learned to save some and have carry-over into the next pay period so it would build. When we saw it building, that allowed us to start thinking about “big” things we could do eventually. Regardless, if you choose this method you both can discuss how you want to spend this Fun Money---that's part of the fun!  I hope this helps you as much as it helped us. See the image below for a simplified visual of the process. 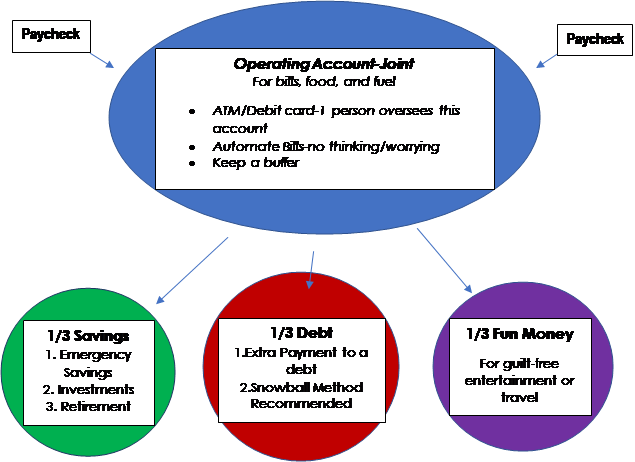